Kate Shelley's parents, Michael Shelley and Margaret Dewan, had been children during the Great Potato Famine that ravaged Ireland. Kate was born on December 12, 1863, near Dunkerrin, Ireland, at a crossroads called Loughaun. In 1865 Kate and her parents came to America, first to Brooklyn, New York, then to Freeport, Illinois, where Michael's sister lived.

The Shelley family followed the expanding railroad to Boone County, Iowa, and settled on  land across the Des Moines River from the thriving depot town of Moingona. Mike Shelley worked for the the Chicago & North Western Railroad, which ran in front of their house. Four more children were born: James, Mayme, Margaret, and John. It was a happy life.

Then tragedy struck twice. In 1878, Mike died after a long battle with tuberculosis. Just seven months later, 11-year-old James drowned in the Des Moines River. Kate and her mother were left to tend to the farm and children without any steady income. Kate could not continue school.

Newspapers across the country heralded Kate Shelley's bravery. The Chicago & North Western, reluctant to draw attention to yet another wreck, quietly gave her flour, coffee, and other supplies. But no one could forget Kate Shelley, as the transcontinental railroad passed by her cabin.

Kate received other rewards: a gold watch, a brooch, earrings, and money. Social activist Frances Willard paid part of her college tuition, and the State of Iowa awarded her a gold medal. A philanthropist erected a fountain in her honor, and the Chicago Tribune and a Turkish immigrant raised funds to pay her debts. Then in 1901 a massive trestle was erected, and folks called it the Kate Shelley High Bridge.

Throughout her life, Kate battled illness and poverty, worked numerous odd jobs, and struggled to keep her family's land. She died in 1912 at age 48. Yet her selflessness and bravery still inspires people all around the world. 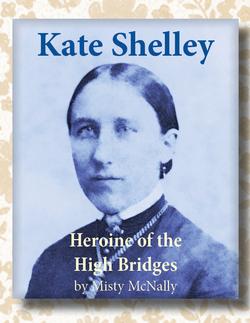 HEROINE OF THE HIGH BRIDGES

To be notified when the book is out, click button below. 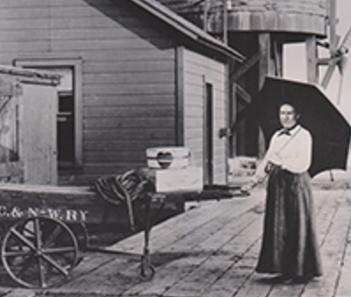 * The birth date on Kate Shelley's gravestone is incorrect.

* Kate and her parents spelled their last name "Shelly."

* She was once engaged, but she never married nor had children.

* Kate had no nieces and one nephew, Jack Shelley. He became a a broadcast journalist and

* The only time Kate left Iowa was to attend to the 1893 World's Fair in Chicago.

* Kate loved dogs, and many photos show her with canine friends.

* Passengers and railroad crews watched for Kate as they passed her house. She often waved!

* Trains sometimes stopped so passengers could meet the famous heroine.

* The Kate Shelley High Bridge was a nickname for the 1901 Boone Viaduct.

* In 2009, the Union Pacific Railroad built a second bridge next to the old Boone Viaduct and christened it the Kate Shelley Bridge.

On July 6, 1881, there was a horrific nighttime thunderstorm. At 11 p.m., the Shelley family heard a terrible crash—it was a train wreck near their cabin on the Honey Creek Bridge. Kate knew a passenger train from Omaha was due through at midnight. If not stopped, they would collide with the wreckage!

Kate ran out and made her way with a small lantern to Honey Creek. There were two survivors in the wreckage. One man urged her on to the Moingona depot for help. Kate trudged along the sloppy tracks to the Des Moines River Bridge. Then her lantern went out. She dropped to hands and knees and crawled across the trestle, over the raging river in the terrible storm. Once across, she ran another mile to the Moingona Depot to the crew there, shouting the warning...then fainted. She soon revived.

The passenger train had already been stopped, so she led rescuers to the men in the river. Three other men had died that night. The damage was severe. But 17-year-old Kate was a hero!